James Cowper Kreston is pleased to announce that it has been shortlisted at the British Accountancy Awards in the category of Mid-Tier Firm of the Year. The winner will be announced at the award ceremony on 13th October 2017.

Robert Holland, Managing Partner of James Cowper Kreston said: “The British Accountancy Awards are one of the most prestigious and well recognised award ceremonies in the sector and we are thrilled to have been shortlisted. The nomination comes from the hard work of our employees across all of our offices and I would like to congratulate everyone on this achievement. We have only a short while to wait to find out the final result and look forward to attending the ceremony in October.”

The British Accountancy Awards, run in association with ACCA and Accountancy Age, celebrate those in the industry who have shown true excellence over the previous year. Mid-Tier Firm of the year is presented to ‘the firm with turnover between £3m and £25m that demonstrates how the firm has added significant value to its clients and across all service areas. The winning firm will show how the services it has provided have been fundamental in enabling their clients to achieve their business goals.’

The award ceremony will be held at the famous Hilton Hotel on London’s Park Lane on 13th October 2017. Attendees will be able to enjoy a delicious Gala Dinner and live entertainment at the After Party. 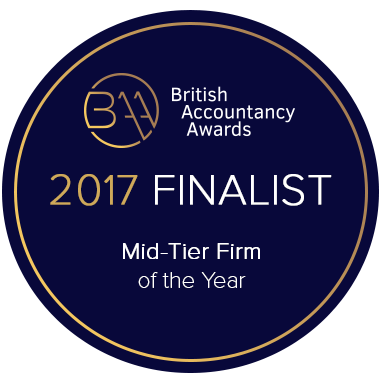